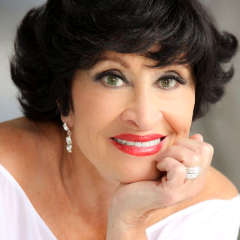 Born in Washington, DC, Chita Rivera trained at the School of American Ballet before becoming one of Broadway’s most beloved stars. She garnered major attention for her role as Anita in 1957’s West Side Story, and earned her first Tony nomination for her role in 1960’s Bye Bye Birdie. Having won Tonys for her work in The Rink and Kiss of the Spider Woman, among many nominations and accolades, Rivera is a preeminent figure of the stage who’s also appeared in film and television. Rivera appeared in the 2003 revival of Nine and later headlined a revue of her career in Chita Rivera: The Dancer’s Life, for which she received another Tony nomination. After appearing in the 2012 revival of The Mystery of Edwin Drood, Rivera took on the lead role in The Visit, for which she received her 10th Tony nomination. Rivera received the Kennedy Center Honors award in 2002 and the Presidential Medal of Freedom from President Barack Obama in 2009.