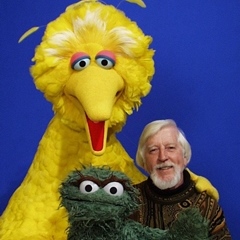 Caroll Spinney has been Sesame Street’s Big Bird and Oscar the Grouch for over 40 years. Spinney’s rich puppetry career began when he was eight years old and put on puppet shows using a secondhand puppet and a stuffed green snake. His interest continued into adulthood, and in 1958 he began his puppetry career on The Judy and Goggle Show. Sesame Street television specials have taken Spinney to China, Japan, Australia, France, Germany, Canada, and the United Kingdom, and he has performed on a number of other shows, including 141 episodes of Hollywood Squares. He has earned four Emmys, two Gold Records, and two Grammy Awards. In 2000, the Library of Congress declared Spinney, as Big Bird, a “Living Legend.” With J Milligan, he wrote the 2003 book The Wisdom of Big Bird (and the Dark Genius of Oscar the Grouch): Lessons from a Life in Feathers. Most recently, Spinney received the Lifetime Achievement Emmy Award from the National Association of Television Arts and Sciences. He is also an accomplished artist and lecturer.