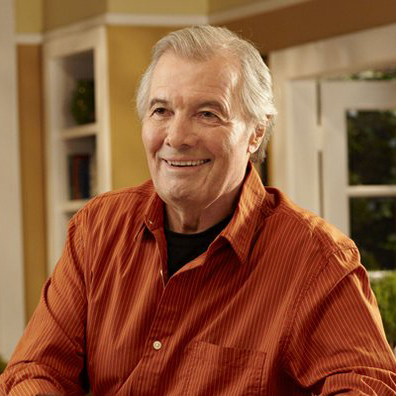 Jacques Pépin is world-renowned as a chef and the host of acclaimed cooking programs on public television, and as a respected instructor, prolific author and gifted artist. As a star of France’s culinary world, he became the personal chef to three French heads of state. After moving to the United States, Pépin worked first at New York’s historic Le Pavillon, then served as director of research and new development for the Howard Johnson Company, a position that taught him about mass production, marketing, food chemistry and American food tastes. On PBS, Pépin and Julia Child won The James Beard Foundation’s award for Best National Cooking Show (for Julia and Jacques Cooking at Home) and a 2001 Daytime Emmy. The author of 25 books and a former columnist for The New York Times, Pépin writes a quarterly column for Food & Wine. He is the recipient of three of the French government’s highest honors: he is a Chevalier de L’Ordre National de la Legion d’ Honneur, Chevalier de L’Ordre des Arts et des Lettres and a Chevalier de L’Ordre du Mérite Agricole. He is a founder of The American Institute of Wine and Food.