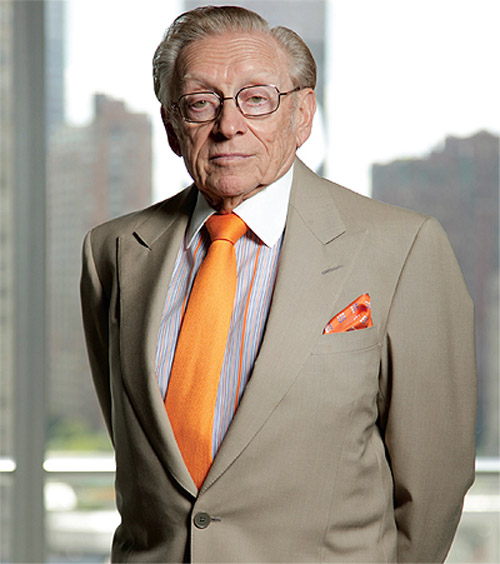 Larry A. Silverstein is the president and CEO of Silverstein Properties, Inc., a Manhattan-based real estate development and investment firm that has developed, owned and managed 35 million square feet of office, residential and retail space. The firm currently has $10 billion worth of development activity in the pipeline.

In July 2001, Mr. Silverstein completed the largest real estate transaction in New York history when he signed a 99-year lease on the 10.6 million-square-foot World Trade Center for $3.25 billion, only to see it destroyed in terrorist attacks six weeks later on September 11, 2001. He is currently rebuilding the office component of the World Trade Center site, a $7-billion project that will consume the balance of his working life.

In May 2006, Silverstein Properties opened 7 World Trade Center, a 52-story, 1.7 million square foot office tower at 250 Greenwich Street, just north of the World Trade Center site. The building is almost fully leased to an eclectic group of tenants. In September 2006, designs were unveiled for three new office towers on the WTC site — 200, 175 and 150 Greenwich Street — that will be developed by Silverstein Properties.

In 2008, Mr. Silverstein announced an agreement with Four Seasons Hotels and Resorts to operate a hotel and private residences within a new development at 99 Church Street in Downtown Manhattan. The 80-story building was designed by Robert A.M. Stern and at 912 feet, will be the tallest residential tower in New York. Stern joins the roster of world-class architects – Santiago Calatrava, David Childs, Lord Norman Foster, Fumihiko Maki and Lord Richard Rogers – who are working to transform the downtown landscape.

Larry and Klara Silverstein have been married for more than 54 years and have three children, two of whom are executives at Silverstein Properties. Mr. Silverstein contributes his time and resources to organizations devoted to education and medical research, meeting humanitarian needs and supporting the arts. He is a classical music enthusiast, a passionate yachtsman and a dedicated New Yorker.