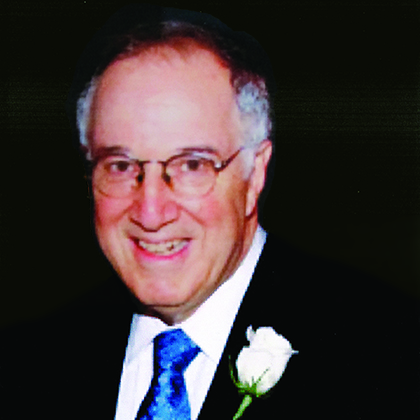 Stephen Solender is a longtime leader of the nonprofit community, with key roles as Executive Vice President of UJA-Federation of NY, President and CEO of the Jewish Federations of North America and Executive Vice President of the 9/11-United Services Group. Solender was born in New York City to Sanford and Ethel (Klonick) Solender. His father Sanford was Executive Vice President of the Federation of New York from 1970-1981. Both Stephen and Sanford emulated Sanford’s father Samuel who, for nearly thirty years served as executive director of the Washington Heights-Inwood YM-YWHA in their leadership within the Jewish community. Solender grew up in Mt. Vernon, NY and like his father and grandfather before him, graduated from Columbia University. Stephen majored in sociology and chose social work as a profession graduating from the Columbia University School of Social Work in 1962. Solender worked for the Jewish Community Centers of Chicago from 1962 to 1969, serving as a teen worker, program director and branch director. In 1969, he moved to Geneva, Switzerland, where he worked for the American Jewish Joint Distribution Committee as Director of Youth Services, Community Centers and Summer Camps. Later he directed services to Jews in Muslim countries and staffed the European Council of Jewish Communities. He served as President of the English-Speaking Jewish Community of Geneva from 1973-5. In 1975, Stephen returned to the United States to become Director of Social Planning and Budgeting at the Associated Jewish Community Federation of Baltimore, and became President in 1979. In 1986, Solender moved to New York, succeeding William Kahn as Executive Vice President of the Federation of Jewish Philanthropies. In partnership with Ernest Michel of UJA of New York, he supervised the merger of the United Jewish Appeal of Greater New York and the Federation into UJA-Federation of New York, the largest local Jewish Federation in North America and one of the country’s largest private philanthropies. He served as the organization’s Executive Vice President for thirteen years, from 1986 to 1999. UJA-Federation of NY honored Solender with its Keeper of the Flame Award in 2002. Solender, in 1988, was the founding President of the Human Services Council of New York (HSC) the umbrella group uniting virtually all-voluntary human services agencies in New York. Solender played a key role in the formation of the United Jewish Communities in 1999, created through a merger of the national offices of the Council of Jewish Federations, the United Israel Appeal, and the United Jewish Appeal. UJC became the central funding and social service system for the American Jewish community; Solender was selected as its first President and CEO and serves now as its President Emeritus. This organization is now known as the Jewish Federations of North America (JFNA). After his retirement from JFNA in 2002, Solender became the second Executive Vice President (succeeding Robert Hurst) of the 9/11-United Services Group, which was tasked with supervising the distribution of more than $700 million that had been donated to voluntary agencies in New York after the terrorist attack on the World Trade Center. After overseeing the distribution of these funds to agencies and some 80,000 clients, and having established protocols for response to disasters by voluntary agencies, Solender with key ay leaders closed down that agency in 2004. In 2004, Solender began work as consultant to the Museum of the History of Polish Jews, which was slated to be built on the site of the Warsaw Ghetto. He subsequently became co-president (with Sigmund Rolat) of the American Friends of the Museum. His leadership was celebrated in a special exhibition about the development of the prize-winning museum at its opening in 2013. In 2003, The Hebrew Union College-Jewish Institute of Religion awarded the degree of Doctor of Humane Letters to Solender. He joined the board of the Jewish Braille Institute in 2001 and served for over a decade as its vice president. An issue of the Journal of Jewish Communal Service was dedicated to Solender in 2002. He served as chairman of the International Conference of Jewish Communal Service and was a founder and vice chairman of Or Zarua Synagogue in New York City, Solender was awarded the John Jay Award recognizing outstanding professional achievement by Columbia College in 2000, He has been involved with other organizations, serving on boards and committees for the World Council of Jewish Communal Service, Brandeis University, Yeshiva University, the Baltimore Institute for Jewish Communal Service and the United Hospital Fund, among others. Solender married the former Elsa Adelman, a journalist, editor and author, in 1960. They reside in New York and have two sons, Michael and Daniel (m. Lynne Whitman) and seven grandchildren.